APPP bases its calculations on unverified assumptions about the number of employees attending presentations each week, and supposes that 85 percent of those employees see no purpose in the presentations.

The APPP is seeking support for a national referendum to ban the use of PowerPoint and other presentation software in presentations throughout Switzerland.

As a long time admirer of the work of Professor Edward Tufte, this brought me to mind of his “Cognitive Style of Powerpoint”

You can't do better than Edward Tufte...

A shorter essay appeared in Wired

The New York Times had a great article  on the use of Powerpoint in the military here’s a slide: 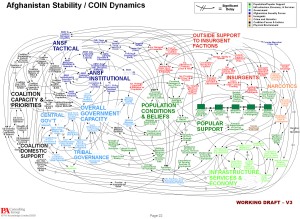 That just about covers it all...incomprehensibly!

So take it from the Swiss APPP, Professor Edward Tufte, The New York Times, or from me.

Powerpoint is not a teleprompter, its not a particularly effective means of communicating, and it wastes your most precious resources- the time of your most valuable people.

Reduce your company’s use of Powerpoint.

This entry was posted on Tuesday, July 12th, 2011 at 2:20 am and is filed under Break Room, Front Office. You can follow any responses to this entry through the RSS 2.0 feed. You can leave a response, or trackback from your own site.

One Response to Anti-Powerpoint Referendum Proposed For Swiss Ballot