5 Things To Know About Triangle Effect, Pseudo-Roundness, and Lobing

Pseudo-roundness is best defined as any shape not perfectly round, which exhibits constant dimensions when measured in any direction between two parallel planes, ie, with a  2 point micrometer.

In centerless grinding, a geometric condition can be encountered that puzzles most shop hands and often stumps the old pros. That geometry condition is called pseudo-roundness, lobing, or the triangle effect.

Pseudo-rounds have odd numbered crests , which because of the exact opposition of their high to low spots always have a constant  “Miked “ Dimension.  This is explained by the fact that the gaging planes of R and r are tangent to the arcs of the profile, and perpendicular to both radii which belong to the same common center. That is: 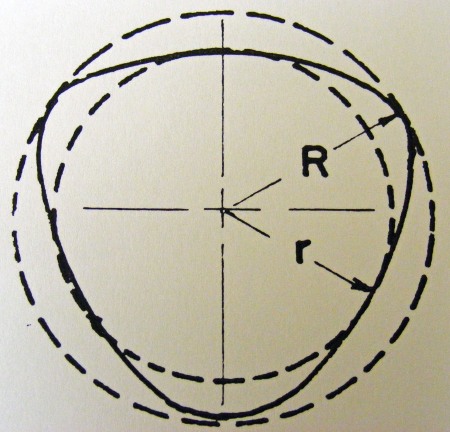 I first encountered this when I had a batch of material that miked fine but didn’t pass the customers roundness test. That material was lobed.

I’ll spare you all the geometry lesson, but here are a half dozen facts that I know from my 30+ years experience in the bar business :

where N is the number of high points or lobes. For a three lobe configuration, A becomes 30 degrees, (the half angle) and the V-Block should be 2*A or 60 degrees included angle.

This entry was posted on Tuesday, September 14th, 2010 at 4:14 am and is filed under Engineering, Shop Floor. You can follow any responses to this entry through the RSS 2.0 feed. You can leave a response, or trackback from your own site.

12 Responses to 5 Things To Know About Triangle Effect, Pseudo-Roundness, and Lobing