A Tale of Two Lines

A colleague asked me “Why am I standing in line at the restaurant if there are so many in the unemployment line?”

I told him that we were standing in line with the 91.7% of the folks who are employed, not the 8.3% who are unemployed (U-3 unemployment measure).

I should have told him that we were standing in line with the 85.2% of folks who are fully employed, as opposed to the 14.8% who are not (U-6 unemployment measure). 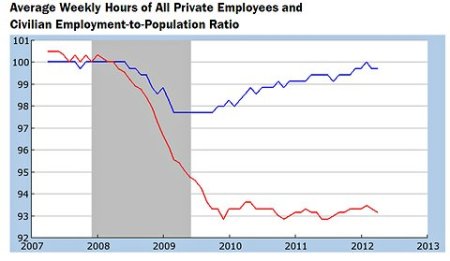 The blue line shows the average number of hours worked by people with jobs in the private sector. It shows that those of us who are working are doing fine.

The red line in the chart below is a monthly index of the employment-to-population ratio, normalized to a value of 100 in December 2007, when the recession began. The lack of an uptick in the redline since 2009 is, we think, the essential tale.

Regardless of how one chooses to explain it, the fact that it has not improved is the critical issue.

We recall Dicken’s opening line from A Tale of Two Cities:

Sobering fact: Long term unemployment, defined to be 27 weeks or more out of work climbed to  5.4 million, or 41.3% of unemployed(U3) people.

About That Unemployment Rate…

Why don’t things seem better- the news says the unemployment rate fell to 8.3 per cent? 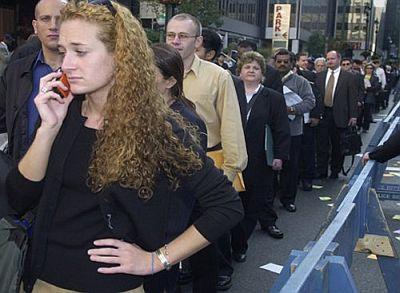 This line only shows the folks counted in U-3... 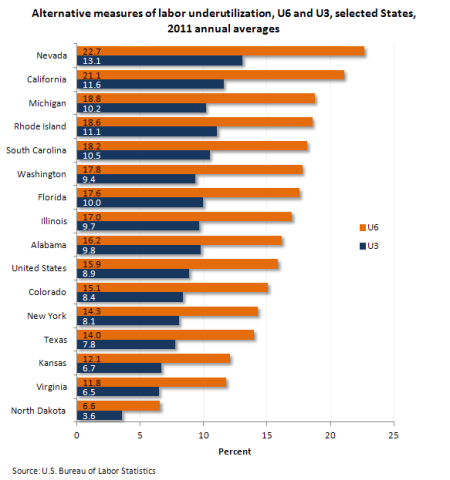 The U-6 rate includes the unemployed, the marginally attached, and persons who are actually employed but who work fewer hours than they would like.

While that  8% rate may sound like a real improvement,  the fact is that in human terms, not filtered through the  rose-colored lens of policy wonks or reporter-speak, the real rate is U-6 or almost double the “official” U-3 rate.

Critical thinking is about recognizing and challenging assumptions. What assumptions are built into the people talking on TV about unemployment?

As this graph shows, one assumption is that they aren’t even talking about darn near half the people who are “unemployed, marginally attached, and persons  who are actually employed but  who work fewer hours than they would like.”

How about that unemployment rate?

Break Room | Tagged: Alternative Measures of Unemployment Graph, Critical Thinking Is Recognizing and Challenging Assumptions, Real Unemployment Rate, U-3, U-6, unemployed- marginally attached- and persons who are actually employed but who work fewer hours than they would like, Unemployment Rate |