If steel did not have the property of plastic deformation, the only ways to make parts from it would be casting  or cutting into shape.

No deformation processes like cold heading, cold rolling, swaging etc. would be possible.

If one subjects a piece of steel to a heavy load, the material will measurably stretch. When the load is removed, if the steel goes back to its original dimension, the deformation that it underwent when the weight was applied is called “elastic deformation.” In this case, the steel did not take a permanent “set.”

If one subjects a piece of steel to a much greater load, if, when the load is removed, the steel does not ‘spring back’ or recover to its original dimension, the new shape or dimension is a permanent deformation. (It is often said to have ‘taken a set,’)  This is called “Plastic Deformation.”

Plastic Deformation is explained by the movement of planes of atoms from their normal positions.

Steel and most industrially useful metals are able to withstand a great deal of this Plastic Deformation before they break.

Brittle metals will just fracture under such loads;

Cold drawing of steel is a process that applies a load to the metal to make the atoms in the steel take new positions with respect to each other, resulting in lowered ductility, increased  tensile and yield strength and new dimensions or shape. These in turn, are often helpful in improving the machinability of the steel, allowing you to more economically produce the parts and components that are essential for our current technologies.

Most people think of steel’s hardness as its main advantage. The facts of the matter are that it is steel’s plasticity or ability to plastically deform that makes it such a useful and versatile material for humankind.

Role of Phosphorous, Nitrogen and Coldwork on Machinability of Carbon And Alloy Steels

Machinability of carbon and alloy steels is a shear process. Working the metal (Shearing to create chip) provides heat. The subsequent sliding of the produced chip on the face of the cutting tool provides heat as well.

Three ways to improve machinability include

The steels that we are talking about are in large part composed of the ferrite phase. This is advantageous to us as machinists, because it has a relatively low shear strength.

Because ferrite is also ductile, it does not cut cleanly and tends to tear. Grade 1008 or 1010 are prime examples of  how pure ferrite machines. Long stringy, unbroken chips, torn surface finishes and lots of machine down time to clear “birds nests” are typical results.

Adding carbon up to a point improves machinability by adding a second harder phase (pearlite) into the ferrite. The good news is that up to a point, the chip formation is greatly improved, and surface finish improves somewhat. The bad news is that the shear strength of the steel is also increased. This requires more work to be done by the machine tool.

Addition of Nitrogen and Phosphorous can not only increase the shear strength of the ferrite, but also reduce the ductility (embrittle it).This ferrite embrittlement promotes the formation of short chips, very smooth surface finishes, and the ability to hold high dimensional accuracy on the part being produced. The downside is that these additions can make the parts prone to cracking if subsequebnt cold work operations are performed.

The graph below shows how cold work (cold drawing reduction) works in combination to reduce chip toughness, resulting in controlled chip length, improved surface finish, and improved dimensional accuracy of the part. To read the graphs, the Nitrogen content is shown in one of two ranges, and Phosphorous content is varied as is  the amount (%) cold work. You can see how the synergistic effects of these two chemical elements  when appropriately augmented by cold work, can drop the materials toughness  by as much as 80-90%. 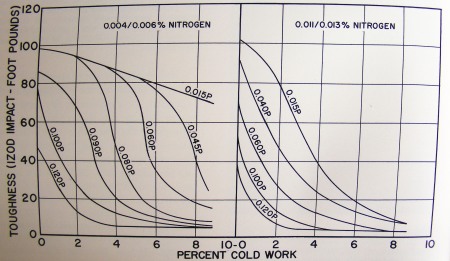 Add to that internal lubrication by a separate manganese sulfide phase or a lead addition, and now you can see how these factors can make grade 1215 or 12L14 machinable at speeds far, far, faster than their carbon equivalent 1008-1010. With greater uptime and tool life.