Surprisingly complete and easy to understand book that can be used to supplement training on the job for beginners, and a nice reference for those with a year or so on the job. Machining and measurement principles and techniques clearly explained.

A nice easy to understand supplement for newcomers to machining.

I was genuinely surprised  to find some really great nuggets like “the Basic Nomenclature of Measurement ” which clearly defines:

…in just a little over a page.

Nice graphics, sample calculations, and well done explanations on how to read a micrometer, vernier, as well as tables with feed and speed data for various types of materials for specific machining operations. very focused coverage of the essentials of the topics.

Do not confuse this book for a hobbyist project catalog.

This is a very clear and understandable text that explains the “how, why, and what” of machining and the use of  tools of our craft.

What I like the most is how the author really distills the information down to useful essentials. And makes them understandable.

In order to machine precision parts, you need to first hold the workpiece securely, accurately and precisely. 5C collets do just that. 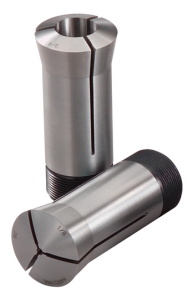 5C collets are the result of 100 years of continuous improvement.

Work can be held using methods other than collets- 3 and 4 jaw chucks come to mind, as well as vises-  but for continuous high volume work with barstock, collets are ideal.

Hardinge invented the 5C collet back in 1901. It became a preferred choice for precision workholding in lathes, mills and grinders. Exacting standards, special alloy steel, heat treatment and spring tempering combine to assure accuracy and durability at low cost. The 5C collet became an industry standard. 5C collets range from 0.5 mm (thats 0.0196″ ) capacity to 1-1/16″  round; 5C collets hold up to 3/4″ square and and 29/32″ hex.

Thanks to Matt at Somma and Tom at Hardinge  for teaching this ‘steel guy’  7 reasons why 5C collets are cool.

Some of our shops look at tolerances in terms of microns- that is millionths of a meter. A human hair can be anywhere within the range of 50- 120 microns, the average hair is probably  somewhere around 100 microns.

This means that the micron-calibrated  folks are measuring at precision levels that divide a human hair in about a hundred thicknesses, and a meter in millionths. That’s pretty impressive.

This is nothing compared to the photo on their site use the link below.

From Geoeye-1:  The Dubai Air Show. (Go to this site, and keep clicking on the picture until you see it in all its glory.) Want to see the Hoover Dam?

So while I continue to be impressed by the accomplishments of shops whose tolerances are anywhere from say a third of the thickness of a sheet of paper to one one-hundredth of the thickness of a human hair,  I have a new found respect for the resolution of, say, half a meter.  And I think we’ll all certainly be a bit more careful when we’re laying out by the pool…

So what is your best “resolution” or tolerance that you can hold, or held, under any circumstances? We’re looking for your stories, so drop us a line.