November ISM-PMI Report Down Half a Point- We Think It Is Remarkable!

The Institute for Supply Management last week reported that “The November PMI® registered 58.2 percent, a decrease of 0.5 percentage point from the October reading of 58.7 percent. “ This value means that “Economic activity in the manufacturing sector expanded in November, and the overall economy grew for the 102nd consecutive month.”

We’d like to provide a wee bit of sensemaking to this report- as normally  people would think that a decline in the index is  not a positive thing. 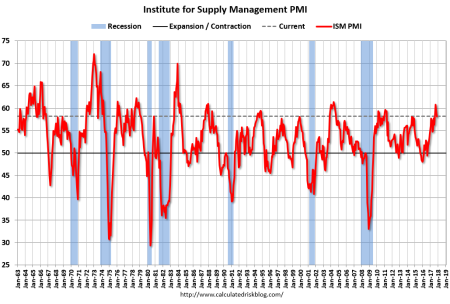 November value remains above most historical values since the end of the great recession, despite seasonality.

We believe that the data is clear that the process has shifted, in a positive direction. Up 4.47 points  98.4%) over the average for the same period for the last three years.

Manufacturing in the United States is performing substantially better than it has over the past three years, and we believe that is is not an anomaly.

This entry was posted on Monday, December 4th, 2017 at 6:55 pm and is filed under Front Office, Uncategorized. You can follow any responses to this entry through the RSS 2.0 feed. You can leave a response, or trackback from your own site.