Where Is The Critical Thinking In The Jobs Situation?

Am I the only one missing the optimism in the employment situation these days? 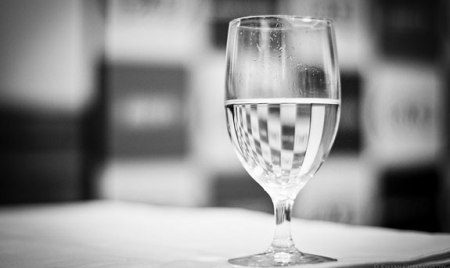 The New York Times headlined “Jobs Data Is Strong, but Not Too Strong…”

The Commissioner of the BLS stated that the unemployment rate remained unchanged at 7.6 percent.

The economy needs to add ~360,000 jobs per month for three years to get the unemployment rate to 6%

That isn’t even half of what we needed!

In actuality, last month the economy added 322,000 part time for economic reasons workers, making the total almost 8.2 million for June. (Economic reasons means “These individuals were working part time because their hours had been cut back or because they could not find a full time job.”)

The employment population ratio is down to 58.7%, and the civilian labor participation rate is down 0.3 percent for the year.

What are they thinking?

The Economic Populist Blog sums up the situation like this:

A huge problem with today’s labor market is the gross number of working part-time generally.  There are a huge number of people who need full-time jobs with benefits who can’t get decent career oriented positions.  Those forced into part time work is now 8,226,000, an increase of 322,000 from last month.  Those stuck in part-time has increased 16,000 from a year ago, not a good sign of the labor market.  This is a hell of a lot of people stuck with part-time hours who need full-time work.  Of those considered employed, a whopping 27,270,000 of them are in part-time jobs, for whatever reason.  That’s 18.9% of people employed are in part-time jobs, a very high ratio.

What about the people that are not counted in the official statistics? 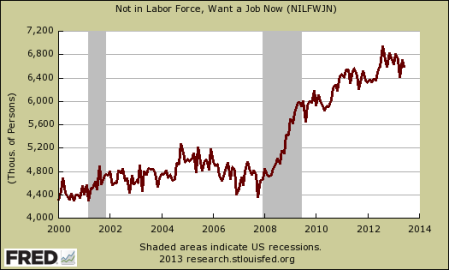 Up 2.2 Million since BEFORE the recession!

This entry was posted on Tuesday, July 9th, 2013 at 3:20 am and is filed under Front Office. You can follow any responses to this entry through the RSS 2.0 feed. You can leave a response, or trackback from your own site.

2 Responses to Where Is The Critical Thinking In The Jobs Situation?