Skills CAN Fill the Skill Gap

Lack of skills were found to be behind the skills gap for production jobs according to a new  report by Twin Cities Business Magazine.

“Only in production work did lack of training seem to be a barrier for job candidates, and in about half of those cases, the training they lacked was technical training at the high school level—the sort of program that has disappeared from many schools.”

PMPA’s Vice President, Darlene Miller states in the article “I don’t think it’s coincidental that when our [high school] dropout rate increased by 30 percent was when all of our technical classes in our high schools ended.” And that is when industry lost its pipeline of potential skilled workers.

Three ideas to get back on track from the article:

1) European Educational Model. “We need to get back in the European path,” Miller says. “They really show students at [middle school] age, what are your potential career paths. And manufacturing and the trades are viewed just as highly as any other career.”

2) Build career awareness in younger students. “It’s costly to wait until people reach college age or older before introducing them to technical careers and skills. Rather than playing catch-up, employers and educators want to start the process earlier, not only with STEM education that emphasizes science, technology, engineering, and math in K–12 schools, but through more direct work with kids.”

3) Overcome parental fears about “vocational track’ education. Despite the fact that 54% of the unemployed have bachelor’s degrees, most parents still equate a college education with job security. “Parents worry about schools “tracking” their children at a young age: pushing them to choose between the path to college and the path to technical school, and closing off the road not taken.” 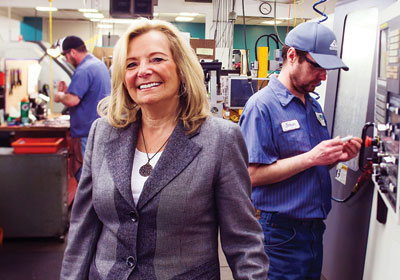 Skills certainly do pay the bills!

The Twin Cities Business Article concludes with comments from Darlene Miller on the skills gap: “The economic security and upward mobility that have long been the perceived promise of a four-year college degree are less certain now, it’s “skills that pay the bills.”

“When we understand that 54 percent of our unemployed are college graduates, what does that tell us? It tells us that we’ve been training people for jobs that don’t exist,” she says. Just as some wonder whether the skills gap is real, Miller suggests that one of its sources—the notion that a bachelor’s degree is always the right choice—is a fiction.

“Is going into debt and spending six or more years to get a four-year college degree, and then not having any assurance of finding a job to cover that investment when you’re done, is that really real?”

Skills do pay the bills.

PMPA has a number of resources to help you explore a possible career in precision machining advanced manufacturing.

This entry was posted on Tuesday, April 30th, 2013 at 3:35 am and is filed under Front Office. You can follow any responses to this entry through the RSS 2.0 feed. You can leave a response, or trackback from your own site.

2 Responses to Skills CAN Fill the Skill Gap