Steve Goldstein at WSJ  Marketwatch has been skeptical of the so called manufacturing renaissance for some time.

While the media runs with “the sun will come out tomorrow” story on the return of manufacturing from offshore, actual data indicates a loss of jobs in March 2013 and a growth rate for employment of ~0.6% year over year. 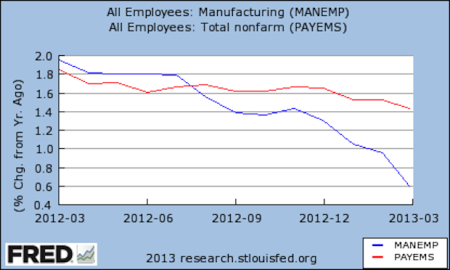 As shop owners, we have open positions for people with skills- but sadly few qualified applicants.

Here is what The Economist has to say about the U.S. Job Problem:

“In other words, the only way to get less-skilled Americans a good wage in a manufacturing industry is to significantly raise their skill and productivity level. If that can’t be accomplished, they can only hope to find good wages in non-traded industries. At least, that is, until wages of less-skilled workers across the developing world come much closer to converging with those in America.”- The Economist

PMPA members are doing all they can to encourage people to gain a skill so that they can claim one of the estimated 600,000 open jobs in advanced manufacturing.

We’ve even created a career database to help people find the training in their area.

We have posted a number of career insights regarding precision machining on our website.

If you would like to claim a rewarding, high satisfaction job in advanced manufacturing, take a look at our material.

P.S. Our goods are “traded goods,” in the parlance of The Economist-  and rank highly world wide. I know PMPA member shops that export to Customers around the world including China, (so much for low cost!) Germany, and Switzerland.

This entry was posted on Monday, April 22nd, 2013 at 1:44 pm and is filed under Break Room, Front Office. You can follow any responses to this entry through the RSS 2.0 feed. You can leave a response, or trackback from your own site.