EPA Overreach- Facts Say It Is A Pattern

A thoughtful response to our post on the EPA  Cross State Air Pollution Rule being struck down from a member of the NTMA group on LinkedIn stated that the court’s decision was “not a single gotcha moment of EPA overreach,” and suggested that the court decision was perhaps more attributable to the party line of the judges appointments.

We were pleased with the comments and accepted the challenge to determine if the incident was in fact “not a single gotcha moment of EPA overreach.”

Here are the facts regarding how the EPA has fared in the courts under the current administration. 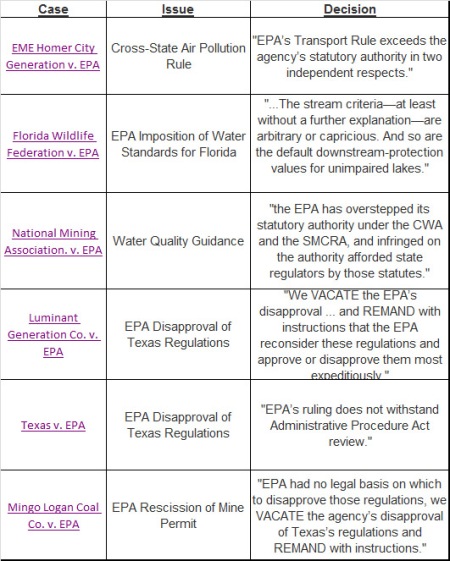 Actually, there were 6 “gotcha” findings just for EPA this year.

Given this record, we would gently suggest that the current administration might want to adjust and recalibrate their “approach and overreach.”

Click here for a  similar listing of more than a dozen  recent regulatory smack downs by the courts across various federal agencies totalling more than $4.6 billion.

This entry was posted on Wednesday, August 29th, 2012 at 3:24 am and is filed under Front Office. You can follow any responses to this entry through the RSS 2.0 feed. You can leave a response, or trackback from your own site.