Industrial Production (IP) increased 0.6 percent in July after having risen 0.1 percent in both May and June. 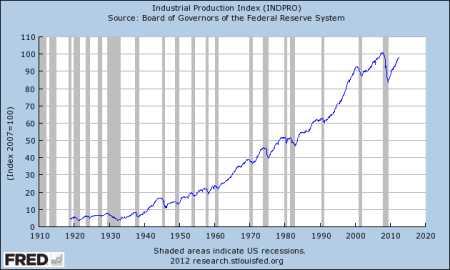 This explains manufacturing’s contribution to the U.S. Economy too.

In July, manufacturing output increased 0.5 percent and was 5.0 percent above its year-earlier level. The factory operating rate moved up 0.2 percentage point in July to 77.8 percent, a level 1.0 percentage point below its long-run average.

Revisions to the rates of change for recent months left the level of the IP  index in June little changed from its previous estimate. Manufacturing output rose 0.5 percent in July, the same rate of increase as was recorded for June.

At 98.0 percent of its 2007 average, total industrial production in July was 4.4 percent above its year-earlier level.

The production index for durable goods increased 0.8 percent in July.

Gains of more than 1 percent were recorded in

Manufacturing continues to be a strength of the U.S. Economy. The U.S. manufactures more than Brazil, Russia, India, and China combined. If U.S. Manufacturing was a country, it would be the sixth largest in the world.

This entry was posted on Thursday, August 16th, 2012 at 3:44 am and is filed under Front Office. You can follow any responses to this entry through the RSS 2.0 feed. You can leave a response, or trackback from your own site.