Bernanke Is Right Chinese Mercantilism, Not Fed Easy Money, Are Making a Mess

Currency mercantilism in China and elsewhere is causing a mess-especially in the United States. 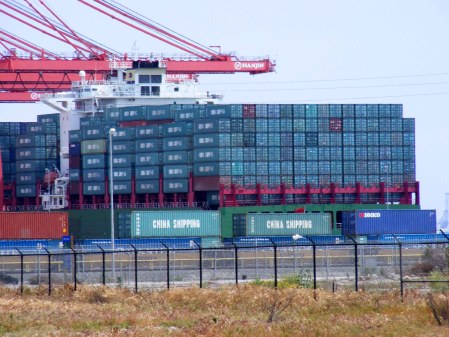 Unemployment in the Midwest is imported in containers like these from China.

Last week, Bernanke fingered China, Taiwan, Singapore, and Thailand for driving down the values of their currencies. Through massive government purchases of U.S. Treasuries securities, those mercantilists accomplish huge trade surpluses and jack up their GDP growth and employment. The flip side is a huge U.S. trade deficit that sentences Americans to slow growth and 10 percent unemployment.

Sadly, such mercantilism makes free trade an unworkable strategy for the United States.

Global demand for goods and services has become so distorted by subsidized Asian exports that workers in the United States face terribly high unemployment. Add in those stuck in part-time jobs that would prefer full time work, and the United States is losing the productivity of at least 10 million workers. At about $100,000 per worker, that adds another $1 trillion, bringing total lost productivity to about $1.3 trillion dollars.

At the recent IMF meetings, Treasury Secretary Geithner asked European allies for help in persuading China to revalue the yuan. Led by Germany, the United States was told to pound salt and instructed to slash its budget deficit and tighten monetary policy.

No surprise. Germany enjoys huge trade surpluses with a euro that is undervalued for its economy, because it is lumped into Euroland with weak Portugal, Ireland, Greece, Spain and Italy. Germans live well and impose austerity and unemployment on those neighbors. Berlin doesn’t want any sacred mercantilist cows slayed, lest its own ruse get discovered.

If the United States cut its budget deficit in half and raised domestic interest rates two percentage points, U.S. consumption and imports would crash, unemployment would rocket to 15 percent, and a global depression would result whose horrors we all thought were long ago buried in history books.

If China and Germany won’t be reasonable, the United States is really left with no option but to take direct action to balance its trade.

China’s government purchases to suppress the yuan come to about 35 percent of GDP and provide a subsidy on exports of similar amount. Washington should even things up by imposing a comparable tax on purchases of yuan and euro for the purpose of importing from or investing in China and Germany, until their leaders agree to engineer an orderly revaluation of currencies and trade.

The Chinese and Germans shouldn’t care-after all, the Americans are nothing but whining spendthrifts whose problems are of no import. They would scream bloody murder anyway.

Beneath the howls, domestic demand and employment in the United States would fire up, manufacturing would flourish, GDP growth rise to about 5 percent, and unemployment would fall to a similar figure.

The extra growth would eventually balance the U.S. budget, as it did during the Clinton years.

Once China, Germany and others agreed to a realignment of exchange rates and the tax ended, all nations would benefit from trading with a more rapidly growing and stable U.S. economy.

Peter Morici is a professor at the Smith School of Business, University of Maryland School, and former Chief Economist at the U.S. International Trade Commission.

This entry was posted on Monday, November 22nd, 2010 at 11:30 am and is filed under Break Room, Front Office. You can follow any responses to this entry through the RSS 2.0 feed. You can leave a response, or trackback from your own site.

One Response to Chinese Mercantilism, Seconded by Germany…