Nothing Is Made In The U.S. Anymore-FALSE!

“If U.S. manufacturing were a country by itself, it would be the eighth largest economy in the world.” 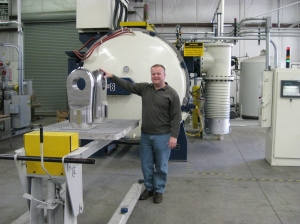 It happens to me fairly often. I’ll be at a party, or out to dinner with a group of people, and after someone in the group finds out I’m employed in manufacturing they will say “it’s really a shame that nothing is made in the U.S. anymore.”

It happened to me again last weekend. So I decided to look into the topic a bit more. I know we still make “things” here in the United States. I see it on a daily basis. Just how true is their comment that manufacturing has vanished in the U.S.?

I performed a little research on the topic and found the following statements in NAM’s (National Association of Manufacturers) “The Facts about Modern Manufacturing” 8th Edition (www.nam.org).

“Between 1947 and 2008, both manufacturing GDP and overall GDP rose over sevenfold. It is generally unnoticed that the quantity of manufactured goods has continued to grow, leaving many people with the incorrect notion that little domestic value is produced in the United States anymore.”

“Manufacturing production is now at the highest point in its history and is keeping pace with that of the overall economy in terms of physical output.”

“…the quantity of manufactured goods produced in the United States has kept pace with overall economic growth since 1947, as both GDP and manufacturing have grown by about seven times.”

“Over the last ten years ending in 2008, manufacturing value added has increased 22 percent.”

“Total manufacturing activity in the United States—measured in terms of physical output—continues to grow.”

The United States still has the largest manufacturing sector in the world, and its market share (around 20 percent) has held steady for 30 years.”
“One in six private sector jobs is still in or directly tied to manufacturing.”
“Fifty-seven percent of all U.S. exports are in manufactured goods.”
“If U.S. manufacturing were a country by itself, it would be the eighth largest economy in the world.”
“U.S. manufacturing share of global manufacturing value added has barely budged from its 1980 level of 22 percent.”

We lead the world in "making stuff"

The U.S. manufacturing industry has challenges like every other business sector, but to the people who say that manufacturing has disappeared, I would offer the following quote…
“The reports of my death have been greatly exaggerated.”– Mark Twain

This entry was posted on Thursday, May 27th, 2010 at 3:29 am and is filed under Break Room, Front Office. You can follow any responses to this entry through the RSS 2.0 feed. You can leave a response, or trackback from your own site.

3 Responses to Nothing Is Made In The U.S. Anymore-FALSE!