Can transporter beams be far behind? 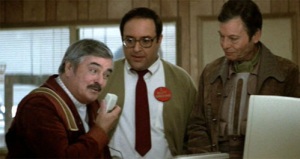 The scientists hit an aluminum target with a short pulse of extremely high energy (more power per pulse than an entire city’s worth of consumption) which knocked out an inner core electron in each aluminum atom without disturbing the metal’s crystalline structure.

The result was  a 40 femtosecond period  of time where the aluminum was transparent to ultraviolet radiation. “What we have created is a completely new state of matter nobody has seen before,” states Professor Justin Wark.

Commercialization remains a few years away- the transparent aluminum created was less than 1/20th the diameter of a human hair. And seeing as how a femtosecond is 1 millionth of a billionth of a second (that’s  1.0 times 10 to the minus 15th power) 40 femtoseconds (40 millionbillionths of a second) means that this stuff is somewhat- uhh- perishable. No word on the machinability either. Nevertheless, it’s one more item to check off our Life List of Cool Stuff We Need To Invent. Congrats to the Oxford team.

Now, how many screw machine parts will they need for a prototype Transporter Machine and its power supply? If the team from the Enterprise came to your shop, could you help them make the parts they need? What items are on your Life List of Cool Stuff  We Need To Invent?

This entry was posted on Monday, August 17th, 2009 at 6:59 am and is filed under Engineering, Uncategorized. You can follow any responses to this entry through the RSS 2.0 feed. You can leave a response, or trackback from your own site.